Getting Better Every Day!!

Hey Everyone,
I hope you had a great weekend. After an incredible personal training staff retreat on Friday I started my week off feeling invigorated, re-charged, and re-focused!! I had a very productive day followed by an awesome workout and 1 mile jog with my son. So, I though I would share with you what we do to getter better, and build an incredible team.

This year our retreat started with an "Amazing Race" themed road rally. All 50 personal trainers, small group trainers and pilates instructors were broken into 4 teams, then they had to race through 3 different locations completing both mental and physical team building challenges at each stop. The race concluded with the teams finding their way to the "secret" retreat location...... Camp Kulaqua. The last team to arrive would be the penalty team. This year the penalty team would have to make lunch for all of the trainers, and for a little bit of fun we had to compose and perform a rap song......... you may have noticed I said "we", because my team was the penalty team. In 10 years, this is my first time being on the penalty team, and believe it or not it was a blast!!

Once at Camp Kulaqua the teams took part in a low elements challenge course. This was followed by a little free time in the springs catapulting fellow trainers off the "blob" into the springs. Next was penalty team time. We had to prep and serve salads and sandwiches for everyone. Once lunch was complete it was our time to take the stage and perform our rap song. It was a hit!!..... if I do say so myself:) Stay tuned to future blogs for the video I will be putting together.

Awards time!! This part is always fun. In the month leading up to the retreat we polled the trainers to find winners for various awards such as: Most Improved, Most intimidating, Life Saver, Loudest, Hardest working, Most creative, Spunkiest, Most unpredictable, Most likely to go into politics, and finally The Trainer of the Year Award which went to Rod Clark. Very well deserved.

Now it was time for out "Minute to win it" team challenges. These were games that we had to compete against each other based on the TV show "Minute to win" We completed 11 or 12 games. (which will also be in the upcoming video) The winning team was awarded the coveted screaming chicken in a boot.

After a day like that I was excited to get back to training on Monday. I had a great workout (see below), then went home and played football and baseball with Jacob followed by a 1 mile run as Jacob road his bike next to me.

So, with all that said. I leave you today with maybe a not so simple question. What are you going to do this week to get better? It doesn't matter what you will be getting better at. Whether it is your business life, your personal life, your fitness, your nutrition, your education..... As long as your are doing something to get better every day. I will give you 1 hint. It all starts with a plan. It took us a couple months to plan out this team building retreat, but it was without a doubt worth the time, energy, and investment!!

So good luck, and to get you started on Getting Better here is Mondays Killer workout!

B1. Step up with a bicep curl
B2. KB sumo dead lift
B3. Stability ball plank roll out

So, again, what are you going to do this week to get better? Leave me a comment below and let me know.
Scott
Posted by ScottLarkinfitness at 6:11 PM No comments:

Behind the Scenes of the NSCA National Convention 2010

Hey Everyone,
Today I have a short video for you that I made "Live" from the NSCA National Convention in Orlando , Fl.

I have blogged in the past about the importance of "sharpening your saw". So far this is the 5th seminar/ workshop that I have been to in 2010, so, my saw should stay sharp for at least the next couple of months:)

This short video is for you the client to see how the top personal trainers from around the country spend their weeks, and weekends to continually stay on top of their game.

Posted by ScottLarkinfitness at 10:20 PM No comments: 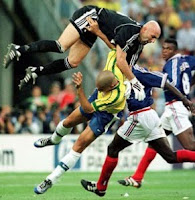 Hey Everyone,
I hope you all are having a good start to your Holiday weekend. I am enjoying the day before my birthday watching an incredible World Cup match-up between Argentina and Germany. So far Germany is leading 1 to nill!

This week I want to share with you a great circuit interval workout focusing on the CHEST and SHOULDERS.

Complete 10 reps of each exercise. Go through each circuit 3 times with 60- 90 sec. rest between circuits. The workout should take between 60-90 min depending on rest periods.

Good Luck, enjoy, and leave me your comments.

Scott
Posted by ScottLarkinfitness at 9:24 AM No comments:

My Most Popular Posts